Click on the videos below to learn more about some of our Hood Ornaments! 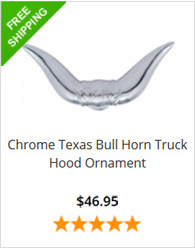 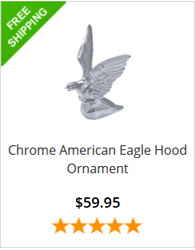 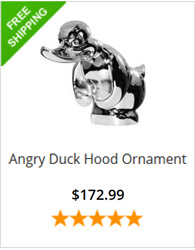 Back in the day, cars had their radiator caps outside of the hood and on top of the grill. The Motometer was used as a thermometer and screwed into the radiator cap. Over time the Motometer became more stylish, and the hood ornament was born as a way to decorate the cap. Hood ornaments were popular in the 1920s, 1930s, 1940s, and 1950s with many auto manufacturers fitting them to their vehicles. Now hood ornaments are widely used on golf carts, cars, pick ups, and semi trucks as a way to add a personal touch with style!

Shop all of our Hood Ornaments!

Click on a Hood Ornament to learn more about it: 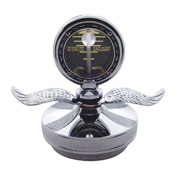 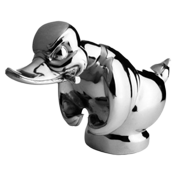 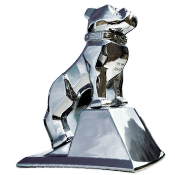 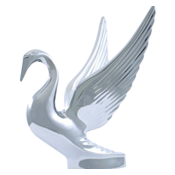 The hood ornament pioneer. Before the Motometer was a hood ornament, it was essentially a thermometer that screwed into the radiator cap and kept the driver informed of the engine temperature.

Motometers began to get more stylish as automakers added knobs, wings, and other decorations. 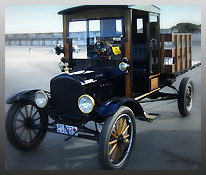 In the 1920's, temperature gages moved to the inside of the vehicle and Motometers started becoming unnecessary. Radiators were also now protected by a grill. Despite this, the radiator cap was kept outside of the hood, at the top of the grill turning the Motometer from a necessity into a classic design element.

Shop for The Motometer in our store!

Created from the same mold as the duck in the movies Convoy and Death Proof! Convoy was released in 1978 and was directed by the acclaimed director, Sam Peckinpah. It was quickly heralded as a cult-classic among truckers and propelled the acting career of Kris Kristofferson (Martin "Rubber Duck" Penwald) the star of the film.

The iconic "Angry Duck" featured on the hood of Martin Penwalds Mack truck has been a symbol of the spirit of adventure and renegade lifestyle from the movie. 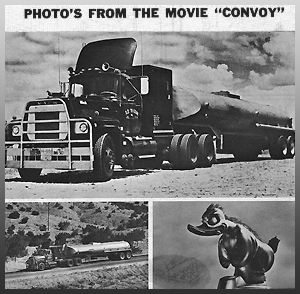 Director Quentin Tarantino loved the film Convoy so much he used the same hood ornament on the main vehicle in his 2007 movie Death Proof. This further cemented the Duck's status as the coolest hood ornament of all time.

Shop for The Angry Duck in our store!

The Bulldog first became associated with Mack Trucks during World War I. British soldiers nicknamed the Mack AC models used in the Allied effort "Bulldog Macks" because of their tenacity. The Bulldog moniker stuck from that point on.

Years later in 1932, Alfred Fellows Masury, a chief engineer at Mack Trucks, was in the hospital for surgery. Not one to be idle for long, during his recovery, Masury hand-carved the first model of the now iconic Bulldog hood ornament out of a bar of soap. Once released from the hospital, Masury applied for a patent on his design. The patent was granted Oct. 11, 1932. Masury was killed in the crash of U.S. Navy airship Akron in 1933, the same year the Bulldog hood ornament began adorning Mack trucks. The hood ornament functions as a grip for opening the hood of the truck. 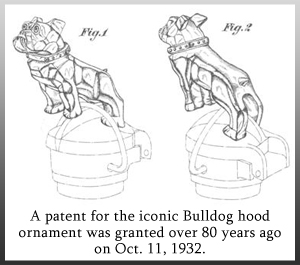 "For 80 years, the Bulldog hood ornament has been a symbol of the durability and reliability customers expect from Mack," said Kevin Flaherty, president, Mack Trucks North American Sales & Marketing. "We're proud of our heritage and that the Bulldog has become so widely recognized - and we tip our hats to Alfred Masury for his contribution to our legacy."

Shop for The Mack Bulldog in our store! 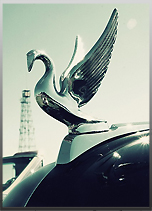 The Swan made it's debut on a Packard automobile. Packard used a number of graceful bird hood ornaments, some referred to as swans, others as cormorants, with longer necks and down turned heads.

Packard was an American luxury automobile marque built by the Packard Motor Car Company of Detroit, Michigan, and later by the Studebaker-Packard Corporation of South Bend, Indiana. The first Packard automobiles were produced in 1899, and the last in 1958.

Shop for The Swan in our store!