Ocala business owners join forces and donate $50,000 to families in need - ClickOrlando, 2020
David DeSantis, the owner of Greiner Clothing store in Ocala, recently pledged $25,000 for people in need of support. The money was donated to United Way of Marion County, Interfaith Emergency Services and to 50 individual families in his community.

“People needed money, they needed cash and I know the government is trying their best to get it circulating and get it in people’s hands and that’s taking time and I just thought I could do this and get it to them quicker,” DeSantis, an Ocala native, said.

He also felt he needed to make a call for action, so he posted a message on Facebook describing his plans. His words moved another local business owner, Joel Raney, from Raney’s Truck Parts.

In Ocala, Cyber Monday grows stronger in age of COVID-19 - Ocala Star Banner, 2020
Even more traditional small retailers in Marion County are hoping Cyber Monday helps save a year in which they've been sorely tested by the coronavirus pandemic, some with help from the Ocala/Marion County Chamber & Economic Partnership. And logistics and warehouse operations that have made this area a transportation hub will be busy with fulfilling all those online orders.

RaneysTruckParts.com went live 10 years ago and has evolved into a shopping site with live chat. It offers truck supplies and parts from chrome axle covers to mattresses for sleeper cabs from a 112-page online catalog.

Raney’s Trucks Parts has come a long way from operating out of an old house in Ocala to its current 125,000-square-foot warehouse and multimillion-dollar a year global online business.

And now, the retailer of aftermarket parts and accessories for big rigs has opened its first brick and mortar showroom adjacent to the warehouse at 3030 W. Silver Springs Blvd. in Ocala.

Joel Raney wants his company to show what is possible in Marion County.

Raney, the CEO of Raney's Inc., an online global retailer of custom accessories for trucks, plans to continue to grow and expand his company and provide more job opportunities to locals. He said people are always impressed when they learn his company is based in the Horse Capital of the World.

"We've been very fortunate at this company," he said. "We've formed a great group of people."

Built for Business - Ocala Style Magazine 2017
Almost eight years ago, Raney’s Inc. was forming without anyone knowing. Mark Raney, the owner of Raney’s Truck Center, hired his nephew, Jacob Chak, to sell some of his old inventory. Jacob began listing the parts online and watched them sell quickly.

Mark’s son, Joel, had started taking classes at the University of South Florida to earn his master’s degree after having no immediate success in his job hunt due to the market recession. He previously graduated with his bachelor’s degree in civil engineering. Always being close to his family, Joel came home to visit Jacob one day and found out what he was up to.

“It just had that start-up feel to it. And my passion has always been business and working with people and building something,” Joel says. "I liked engineering because it was challenging, but I was much more passionate about business, and this gave me an opportunity to get a little bit involved."

Raney's Named on the GrowFL List of Top Florida Companies
The results are in! Raney’s is among only 49 other companies in the entire state of Florida that are being recognized by GrowFL for bringing value to their community, growing the local economy, and creating jobs!

We are so honored to be featured among these impactful businesses who are doing amazing things in our state. There’s something to be said about the people you choose to have on your team and how much of a difference they make! Our CEO Joel Raney and his band of Chromies have made Raney’s what it is today: a career-building, customer service driven ecommerce force!

n an interview with Grow FL, Joel remarked on this achievement and the impact it will have on Raney's and the local community, "There are many amazing and fast-growing companies in Florida so for us to make the list of only 50 is special," he said. “We don’t work hard for recognition or rewards, but it sure does feel good when you are recognized. That is something special I can share with the team to show to everyone who contributed and is working hard so they can see how much of a difference it's making.

Ocala Magazine's Business of the Year, January 2017.
Young visionary Joel Raney has created a hugely successful e-commerce company from the ground up in just a few short years. However, it's not just an Ocala company being named an Inc. 500 Fastest Growing Private Company in 2016 that makes Raney's stand out. It's also the way 28-year old Raney has built a team based around eight core values - kindness, dependability, humility, passion, happiness, honesty, open-mindedness and family spirit.

"We hire by our core values," said CEO Joel Raney. "To be successful, you have to build a good team. We have an awesome team. It's a pleasure being around these people, knowing we can depend on each other."

In just four years, since incorporating, Raney's has grown to a staff of 47 and recently took over a 125,000 square foot building, which houses administrative offices and a warehouse. The company has a whopping 93,000 following on Facebook and their nearly 900 reviews are overwhelmingly five stars.

Raney's says they found their niche in the truck parts industry by selling big rig accessories online. "We put a huge focus on e-commerce which allowed us to grow quickly," he says.

Raney’s Sponsors Entrepreneurship Competition, 2016.
Marion County strives to inspire and encourage innovators and entrepreneurs of all ages by bringing their ideas creative ways of thinking to the community. As such, the CEP holds a competition to local youths to present their ideas to a panel of judges in the hopes of winning 1st prize worth $4,000.

On Friday, November 18th, Ocala held their third annual Youth Business Plan Competition. Raney’s was honored to be a sponsor for the event, and our CEO Joel Raney sat as one of the judges for the event, “We definitely want to be involved in events like this as it goes hand-in-hand with our own story.”

The finale is comparable to an episode of the hit television show Shark Tank. Students presented their business plans to six judges— all of whom were well known business leaders in our own community— and were judged on their oral presentation, which included content, speaking ability, visuals, and how they answered questions asked by the judges.

USF Fast 56 Awards, 2016.
April 29, 2016 was the mark of a true testimony to what makes Raney’s a humbling and exciting place to work. That Friday, the University of South Florida held their annual USF Fast 56 Awards, honoring fast growing businesses established and run by USF alumni entrepreneurs. Joel Raney, our very own Bull and CEO of the company, was honored to accept the award from USF President Judy Genshaft on behalf of the entire team.

Placing 15th out of the top 56 fasting growing bull led businesses in the nation, we are even more motivated to continue building off of the passion and company culture that has been our driving force so far. Read the whole story here.

By Ocala Star Banner, 2015.
Medium Business of the Year, Raney's Inc.: Sheilley noted the seller of custom accessories for heavy trucks grew from two employees in 2010 to 31 now; invested $2.1 million in renovating a 124,000-square foot former Skyline plant on West Silver Springs Boulevard for a new headquarters; is on pace to increase sales more than 50 percent from 2014; and is active in nonprofits including Florida Center for the Blind and Habitat for Humanity. Read the full article here. 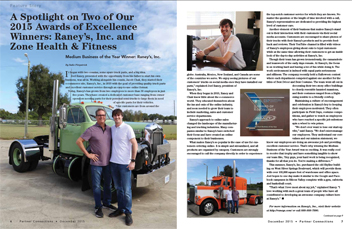 By Richard Anguiano, 2014.
The overstocked inventory collecting dust in Mark Raney's shop a little more than four years ago created a global business opportunity for a company led by Joel Raney, his son.

Raney's Inc. has grown from two people and a computer to a staff of 20 in two offices and a 10,000-square-foot warehouse. It ships custom accessories for heavy trucks all over the world.

"We were the first company completely focused on building online business in the heavy-duty truck industry," said Joel Raney, 26, president of the company.

It began in 2010, when Mark Raney, owner of sales, service and parts businesses in the heavy-truck sector since the mid-1980s, Raney's Truck Center among them, wanted to get rid of some overstocked parts. He asked Jacob Chak, his nephew, if he would try to sell them online. Read the full article here.

The Source, Ocala's News Talk. The Raney's crew goes on the air and talks about available jobs at Raney's, our culture, and why we do what we do! Watch below.

Published on Apr 3, 2015 Minimizer announces winners of their 30th Anniversary Sweepstakes last week, and Raney's had more submissions than any other distributor. How did they pull it off? Find out their (humorous) secret in the latest video blog!